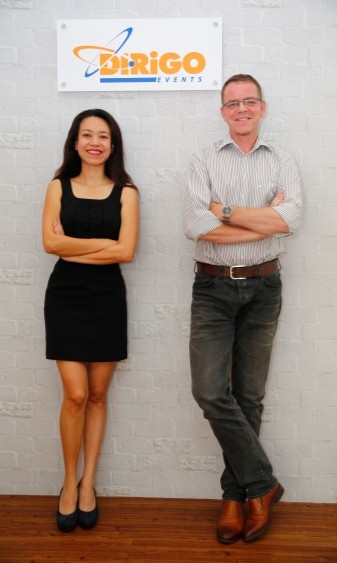 Rainer Biemans, co-founder and Director was born, raised and educated in Switzerland. Rainer has over 18 years of experience in managing sponsorships, event management & organization of a wide range of sporting events. He began his career in Switzerland by managing sponsorships for a global bank and later insurance company and brewery. He managed sporting events such as the ITU Triathlon World Cup 2000, FIS Alpine Ski World Cup 2000 – 2003, FIS Alpine Ski World Championships 2003, the Swiss Football National Team 2002 and UEFA Euro 2008 in Switzerland & Austria (in Switzerland). He also delved into event management & organization starting with the Tour de Suisse 2006, one of the top cycling events in the world for IMG in Switzerland.

Gloria Ng, co-founder and Director was born and raised in Malaysia. Gloria returned to Malaysia after receiving her Bachelor of Arts Degree from Deakin University in Melbourne, Australia. Prior to setting up Dirigo Events, She has been in the events industry for over 18 years, at the helm of some international concerts, corporate social responsibility campaigns, marketing campaigns, launches, etc. Among some of the events she was in charge of are the F1 on-ground activities, opening and closing ceremonies of the Asian X-Games qualifiers, Santana, Vanessa-Mae, Kitaro and Bon Jovi concerts, just to name a few.

I would like to receive information about special offers, promotions, other marketing materials
and other event updates from Dirigo Events, Sponsors and Partners.